Why are you optimistic about ASML?

ASML is not a household name, but it is the key to modern technology. It makes possible the electronic devices we use every day. The group, which is dual listed in Amsterdam and New York, calls itself "the most important technology company you've never heard of" because it provides the "lithography" machines necessary to make semiconductors.

The semiconductor industry currently relies on "deep ultraviolet" (DUV) lithography systems, which are currently ASML's largest source of revenue。 DUV systems account for nearly 50% of the group's total sales of 11.8 billion euros (10.7 billion pounds) in 2019. ASML is not the only manufacturer of DUV equipment. They also face competition from Nikon and Canon in this field, but they have won nearly 90% of the market share.

While this is an impressive feat, the next phase of ASML's growth could be even more dramatic.

The development of the chip industry is guided by Moore's law, which states that the number of components that can be integrated on a chip should double every two years. Some people predict that because the chips are so small today, the law (first formulated in 1965) may have come to an end. But EUV allows manufacturers to move on, producing smaller, more powerful chips, and producing them faster and more efficiently.

As a pioneer of this technology, ASML has a monopoly position in EUV system, which gives it considerable pricing power. In 2019, the average selling price of EUV system is 108 million euro, while the typical DUV device is 58 million euro. As more and more chipmakers turn to euvs, prices will rise, and JPMorgan predicts that sales of these systems will surpass duvs from 2021. 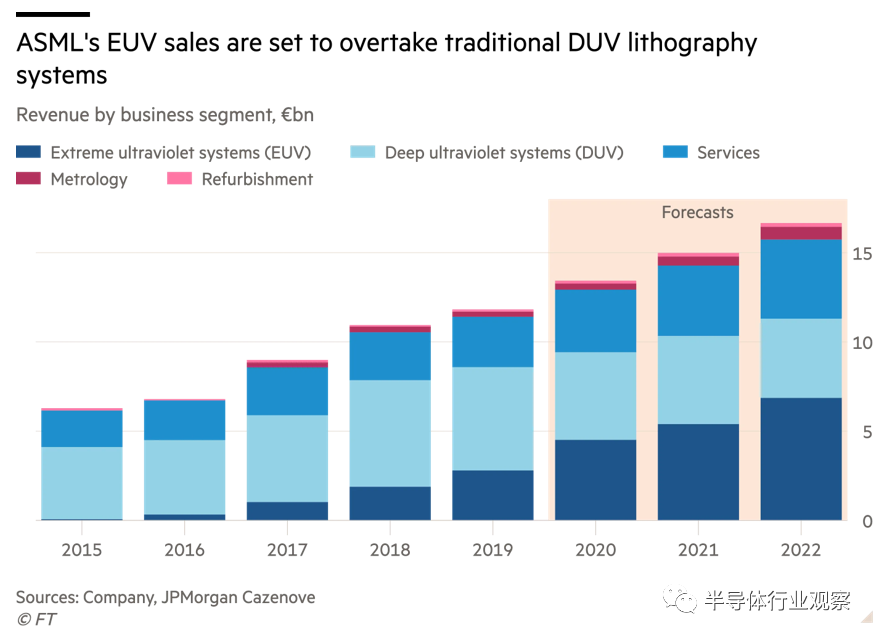 The group is also one of the top 10 shareholders of the Scottish mortgage investment trust (gb00bldyk618), and its monopoly position and ability to take advantage of structural growth drivers also attract the group's attention.

"With the electrification of cars, 5g technology and the Internet of things, the demand for semiconductor chips will continue to grow, which means ASML has several rapidly expanding global markets," said Stewart heggie, a mortgage investment expert in Scotland. Indeed, ASML should be both a driving force for technological development and a beneficiary of technological trends, which we are likely to see in the coming decades. "

ASML also uses a "customer co investment program," which allows chipmakers to buy minority stakes and help fund research and development activities. Intel, Samsung and TSMC have all used the facility before, and once the technology is developed, it can be realized.

The technological advantages of the group lay the foundation for high profits. In the third quarter of 2020, the gross profit margin is 47.5% and the operating profit margin is 30.7%. ASML guidance, fourth quarter gross margin will increase to 50%.

At present, the profit margin of EUV system is low, and the gross profit margin is about 40%. However, with the increase of production, ASML predicts that EUV profit margin will catch up with DUV profit margin in the next two to three years. Bank of America forecasts,By 2025, the gross margins of EUV and DUV will remain at the same level. ASML's profitability will continue as sales and profit margins improve (see chart)。 ASML's original goal was to produce 35 EUV systems by 2020, but they said the company would fall behind its goal. It's not just about the pandemic; it's also about Intel's delayed production of its new 7Nm chip due to defects. Despite this, ASML plans to manufacture 45 to 50 EUV systems this year and guide EUV sales to grow for the fifth consecutive year to 5.4 billion euros.

However, Intel may face further complications as radical investor third point faces pressure to abandon its chip manufacturing business. But liberum analysts believe that if Intel outsources its chip manufacturing activities to TSMC, this may be a good solution for ASML. This is because ASML is the only supplier of TSMC's lithography technology, while it competes with Nikon to work at Intel.

In the trade war launched by President trump, semiconductor has become a key battlefield between the United States and China. China is not a significant part of ASML's revenue, accounting for 12% of net sales in 2019. The United States recently listed SMIC, China's largest chipmaker, as its "entity list", which means that technology licensing is required to export technology from the United States to SMIC. SMIC is a customer of ASML, but liberum estimates that it accounts for less than 1% of the group's revenue.

ASML can avoid the restrictions of the United States to a certain extent by shipping its DUV system from the Netherlands to China. But with the United States relying on its European allies, the Dutch government delayed renewing its license to allow the organization to ship its EUV system from the Netherlands to China. It is not clear when or whether it will be awarded.

In the long run, as China looks more self-sufficient, it is conceivable that domestic competitors can develop their own EUV systems. But it has to start from scratch, competing with ASML's huge investment and decades of experience. At the same time, the incoming Biden administration can alleviate the adverse factors of the trade war, although Biden's specific strategy for China is still unclear.

ASML's net debt at the end of September was EUR 219 million, but it is generally expected that ASML's net cash will be slightly higher than EUR 900 million by 2020. The group has maintained a net cash position at the end of the year for more than a decade and has a good record in terms of annual free cash flow generation. This enabled it to invest in mergers and acquisitions, such as the purchase of Cymer, a photolithographic light source supplier, in 2013 for 2 billion euros, which promoted the development of the group's EUV technology and rewarded shareholders through dividends and buybacks.

As a result of the downturn in the semiconductor industry in 2018 / 19, ASML's share price has maintained a growth momentum over the past year, rising by more than 50%. The current P / E ratio is 41 times the expected P / E ratio in 2021, and the ratio of enterprise value to operating profit is 37. 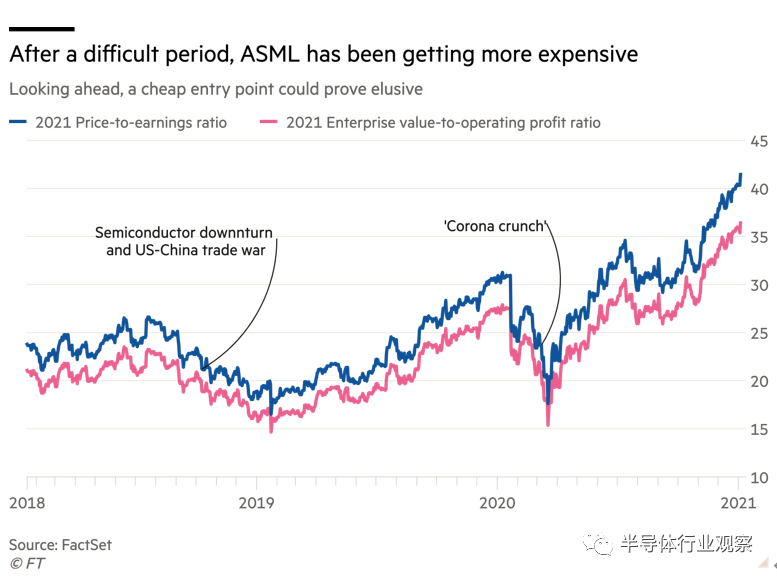 As Mr. heggie pointed out: "ASML may be a technology company that most people have never heard of, but its lithography machine is crucial to the progress of our daily life and should help ensure that ASML can grow at a considerable rate in the next few years."