For the first time, astronomers have detected the final message from stars digested by black holes

For decades, astronomers have been discovering bursts of electromagnetic radiation from black holes. They think those are the result of the tearing of the stars, but they have never seen a silhouette of the actual material ligament. Now, a group of astronomers, including lead author Giacomo Cannizzaro and Peter Jonker from sron / Radboud University, have observed for the first time the spectral absorption lines caused by the filaments of torn stars. 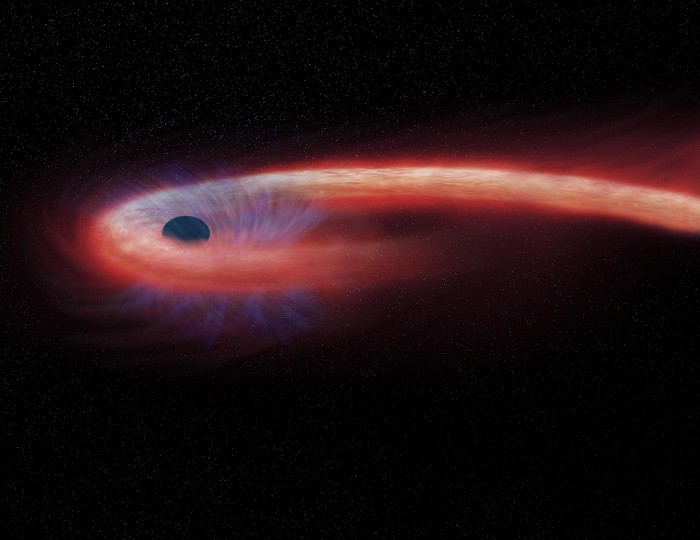 The black hole tears a star apart, leaving a long string of stellar matter that wraps itself around the black hole. Source: NASA / CXC / m. Weiss

Most stars in our universe die of natural causes. They are either blown to pieces by extraterrestrial objects, or simply cooled down due to fuel shortages, or collapsed in a giant supernova explosion. But stars living in the inner regions of the galaxy may not be so lucky. They are likely to be torn into thin filaments by supermassive black holes lurking in the centers of most galaxies. The extreme gravity of the black hole pulls harder on one side of the star than on the other, so that it tears the star apart. Astronomers like to call the process spaghetti, but in scientific publications they are reluctant to stick to the official term tidal disruption.

After a star becomes a noodle, it will continue to fall further into the black hole and finally emit a burst of radiation. Astronomers have been discovering these eruptions for decades, and according to theory, they think they're seeing tidal damage. But they never saw the actual material ligament, like a physical object that not only emits but also blocks light. Now, for the first time, an international team of astronomers has observed spectral absorption lines at one pole of a black hole. It is already obvious that the black hole may have a disk of accreting matter around its equator, but the absorption line above the black hole's pole indicates that there is a long line winding many circles around the black hole, just like a gauze ball coming from the actual material tough band of a just torn star.